The TLR Club has a 7 year running tradition of getting together in the early hours of one of the coldest days of the year to go out and take photographs together. This year we decided to get ourselves better acquainted with a Catholic education and explore the old Father John Redmond Catholic Secondary School (FJR CSS).

A brief history of the site: Formerly the Alderwood Collegiate Institute from 1955-83 (also the set of the mid-1980s CBC children’s series The Edison Twins!), FJR CSS was established on the site in 1986. 21 years, in May of 2006 FJR CSS celebrated their current run as an institution  and then relocated later that same week to their new digs on the Lakeshore Psychiatric Hospital grounds beside the Mimico Lunatic Asylum. Besides being host to the alien invasion of Stephen Spielberg’s production Falling Skies in 2010, the school has since remained unoccupied.  In August 2012 the southern-most 8.5 acres portion of the original Alderwood C.I.’s 14.1 acre site was purchased by the developer Urbancorp and the school is slated for demolition this Spring. 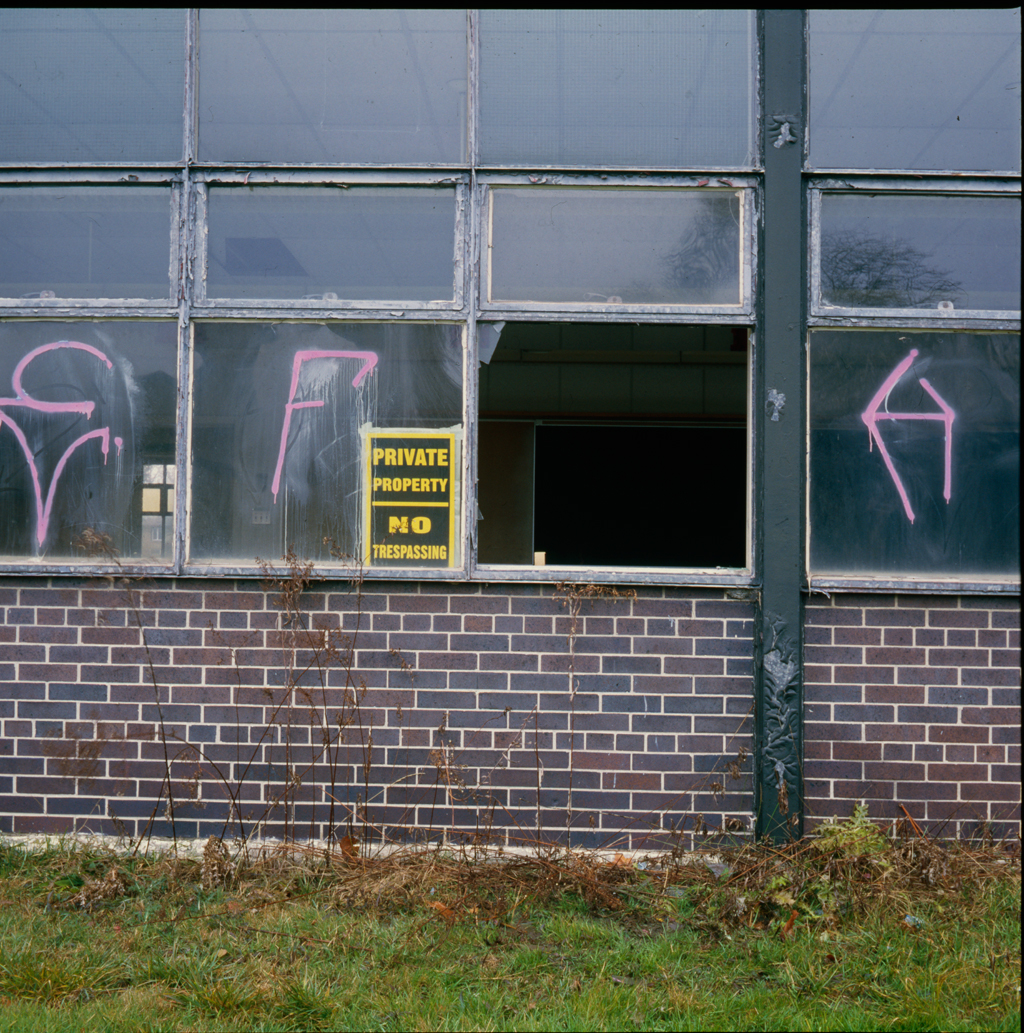 I don’t know what it is about an educational institution that gets urbex photographers excited. Obviously we don’t follow rules well, we have insatiable curiosities and will take some crazy risks to get the photos we want. Maybe it’s the rush of breaking all the schools rules: snooping in the principals office, going through a teacher’s desk drawers or seeing what is actually under the auditorium stage… I just know I’ve been dying to photograph FJR CSS since our 2012 failed adventure when we got as far as the science department before having to abruptly leave. 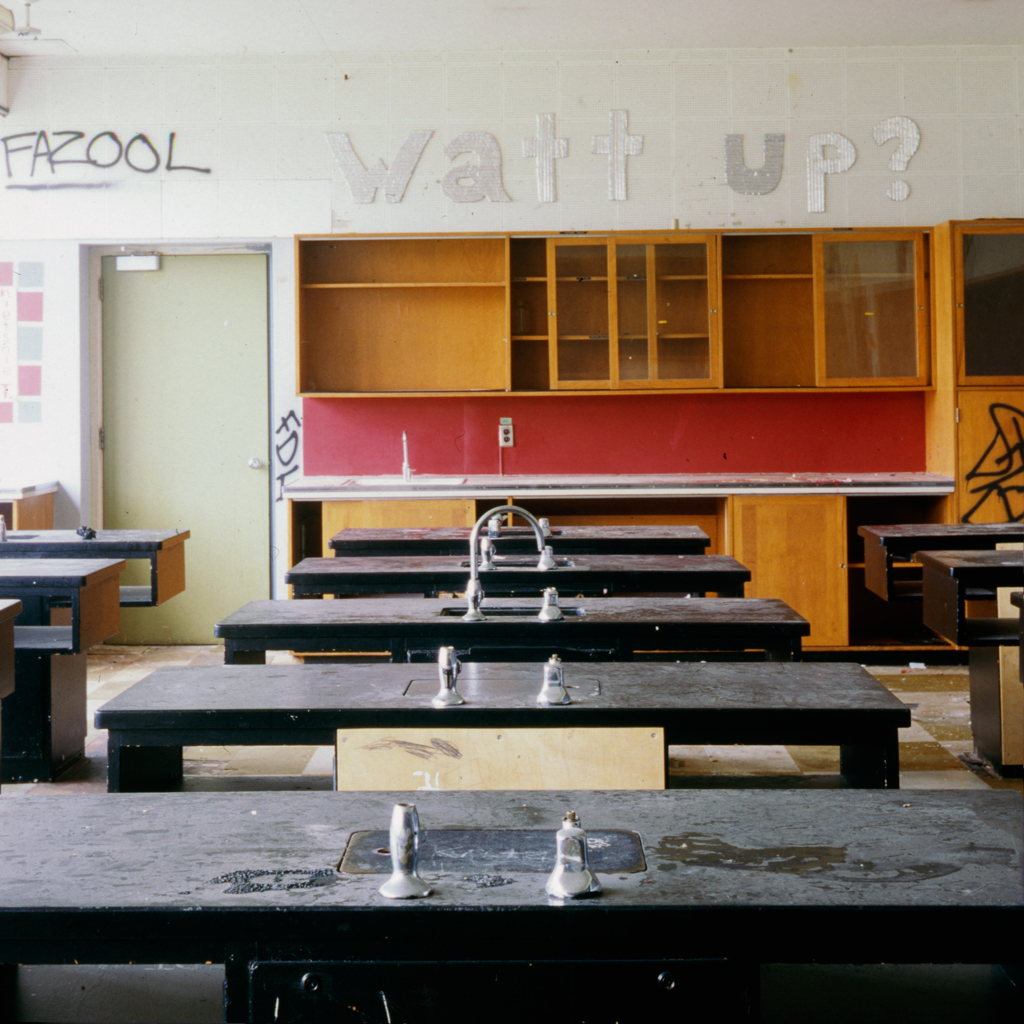 For me it’s the hope for rooms filled with desks. Empty classrooms that have been stripped of all but their curtains and faded magazine covers tacked to the wall become visually monotonous. Or maybe it was the extreme cold that numbed my creative thinking. Almost every window in the building has been smashed is was cold to freezing everywhere! I’ve never smashed a window, or thrown a rock through a display case or a chair off the roof of an abandoned building. In my reality, when I have the opportunity to photograph a site with the TLR Club there is usually security or busybody neighbors to be aware of. While reviewing my photos it made me wonder when was the window of unfettered opportunity that those with the rocks had?!?!? 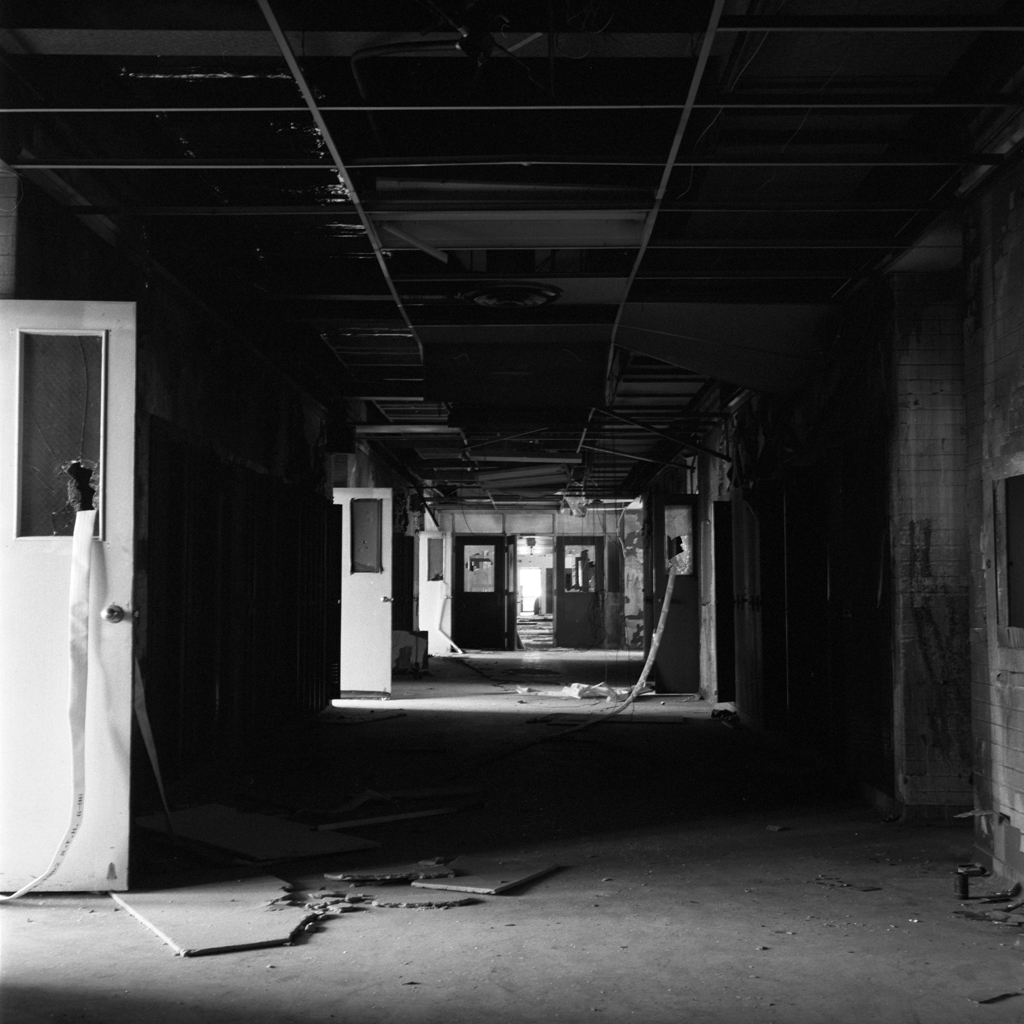 Despite the freezing temperature, room after room of walls and frozen curtains, there were still so many beautiful abstractions to capture or create. I’ve only developed and scanned the black and white roll so far, but as always there is a collection of iPhone snaps to fill in the gap until the colour film is back from the lab.

2 thoughts on “a catholic education”