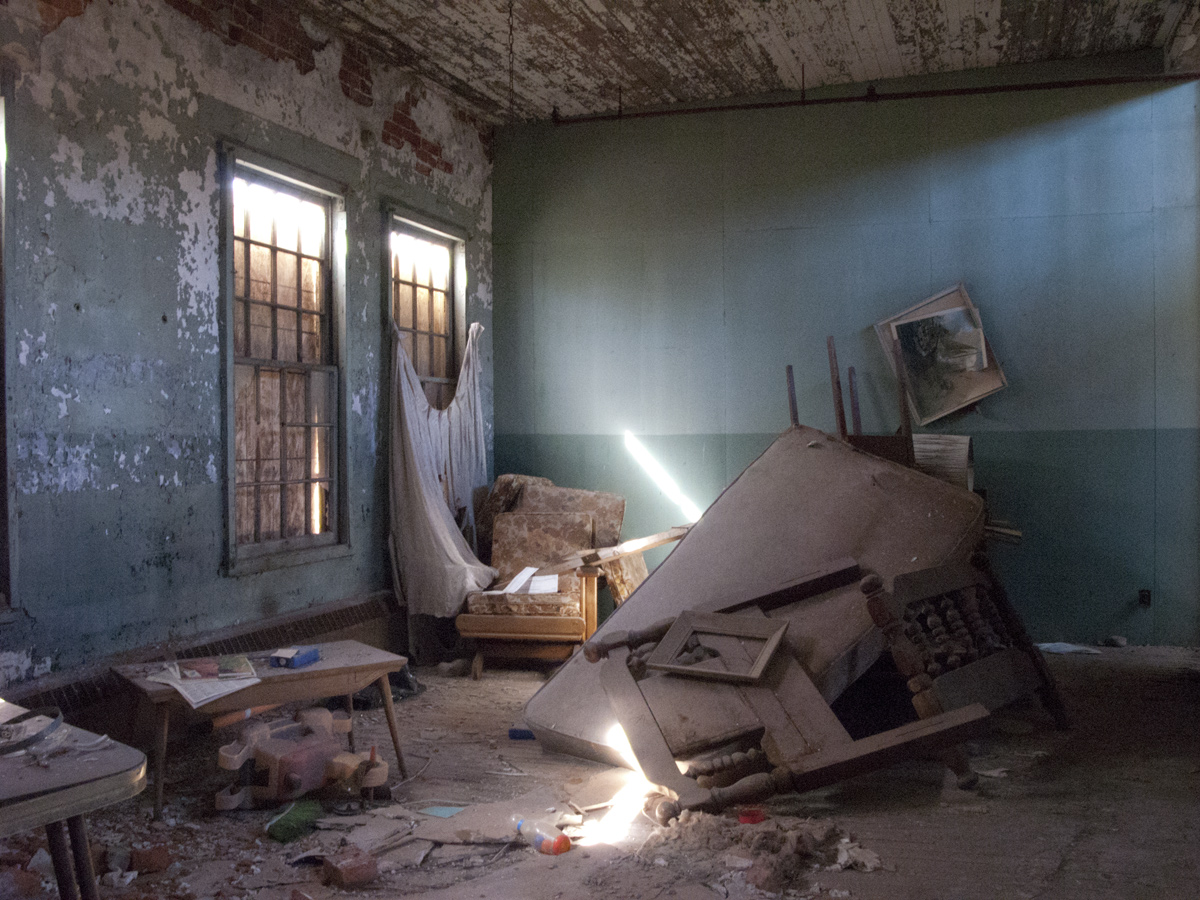 Many of the vacant/abandoned and neglected sites I have a chance to photograph have had long histories and most have had an economic significance to the communities they existed and that  when they cease to exist it’s a blow to the communities surrounding them: Kodak Toronto, Color Corp Buffalo, The Packard Automotive Plant… but not as many have had a news worthy note like the Globe, Black Diamond & Nicholson File site and it was long after the factory doors had closed forever.

Photographing this site was a throwback to the days when I first started wandering around abandoned/vacant buildings with a camera. I knew almost nothing about the history of the Globe, Black Diamond & Nicholson File when we went save its national news coverage in 2012 (more on that below) and so I found myself wandering around in stupor of wonder trying to sort out how to capture the energy of the building/site.

Situated on the bank of the Ganaraska River in historic Port Hope Ontario (there are 270+ heritage sites in town and a giant TransformerTM sculpture),  sits the site of the the Globe, Black Diamond & Nicholson File factory complex of buildings. During the 100+ years of operations, the companies occupying the buildings produced hand tools and files and the factory was always a primary employer for the Port Hope community. I actually think I own files produced by Globe, Black Diamond & Nicholson File!  But i digress.

According to details culled from several blogs and news sites the property was in-use as early as 1853, but it was Frederick Outram who opened the Globe File Manufacturing Company there in 1888. In 1901 Globe File Manufacturing Company merged with Nicholson File Company, (a Rhode Island-based manufacturer – founded in 1834 by William Thomas Nicholson (1834-1893)) and they made files there until 1976, when the company was bought out by Cooper Tools (now Apex Tool Group). At some point the buildings on the West side of Cavan St. were torn down and houses were built in their place.

In 1988 what was left of the site was purchased in 1988 by Mr. J. Vernezos who maintained an apartment in the building and used the various other areas of the site for storage of a wide variety of personal items – which might explain the random scattering of children’s toys boats, vintage car shells and kiddie pools. There’s something unsettling and creepy about children’s toys in an abandoned or vacant factory. In 1985 the buildings were officially made a heritage site because of the various industrial and archeological features. Mr. J. Vernezos battled violent vandals who smashed anything and everything throughout the site on a regular basis and he was forced to replace the glass in many/most of the windows 3 times while he owned the site.

In 2008, someone attempted to set the building on fire. It’s cheaper than a movie!

In 2012 Toronto Barrister and Solicitor Yigal Rifkin purchased the property with hopes to turn the 75,000 sq ft of derelict buildings into a condominium/shopping/arts complex. But before he could get started, in November of 2012 the derelict site of Globe, Black Diamond & Nicholson File was raided and a very sophisticated marijuana grow-op was discovered inside with 1800+ plants worth an estimated street-value of $1.8 million! The 24 year-old man arrested at the scene was the tenant of the building and it was later revealed he had a license to grow medical marijuana, (a hilarious touch to the story!). Which the landlord probably didn’t have an issue with as his law office (in Toronto), does consulting work for medical marijuana licences through Grow Legally: Medical Marijuana in Canada.

When we toured the buildings last Sunday all the marijuana was gone (duh!), but there was evidence of a grow-op on the second floor and it was fabulous to photograph: tattered plastic sheets hanging between rooms, near windows, a giant makeshift pool collecting for rain water as well as a decimated apartment that looked as though it had barely survived a war complete with a near mint copy of a 1995 National Enquirer with headlines like:”Kevin Costner Love Triangle”, “Michael Jackson flies of with 2 boys” and “Christie Brinkley’s Hubby Accused of Wife Beating”! Combined with perfect sunlight filtered through filthy windows, the vintage structure of the building featuring vaulted columns, factory windows, skylights, 40+ years of vandalism (oddly very little graffiti), hoarding and neglect – each room was a magical space to be photographed.

As usual: Enjoy the iPhone snaps – when time permits I’ll post more from the magical Rolleiflex!